After the massive gains some of the top marijuana stocks delivered over the past year, how much more upside can these companies offer? Investors are asking this question after the top marijuana players announced mixed results for their fourth-quarter, which was the first full period after Canada legalized the recreational use of marijuana in October, becoming the first developed nation to do so.

Realistically, there’s no right way to value pot stocks for a very simple reason: these companies don’t have enough history to give analysts a starting point on which to base their forecasts for the future. Their rich valuations are predicated on the estimated market sizes, future sales assumption, and the global legalization hype for both recreational and medical consumption of cannabis. These scenarios may or may not materialize.

Let’s briefly discuss the fourth-quarter performance of the top three players and see how far they have gone in their growth journeys.

Canopy Growth Corp (NYSE:CGC) , the largest marijuana producer, beat analysts expectations on sales in Q4, but disappointed on gross margins. The company reported net revenue of C$83 million, up 282% from a year earlier. Its adjusted loss before interest, taxes, depreciation and amortization widened to C$75.1 million, versus the C$45 million loss analysts had expected.

Adjusted gross margins fell to 22% from 55% from the same period a year ago as the producer faced higher costs related to cultivation subsidiaries that aren’t fully commissioned, the development of edible and beverage products, and lower average prices for recreational pot versus medical pot.

Chief Financial Officer Tim Saunders told analysts in a conference call that the company believes gross margins will improve in the coming quarters when all of its cultivation facilities reach full utilization. 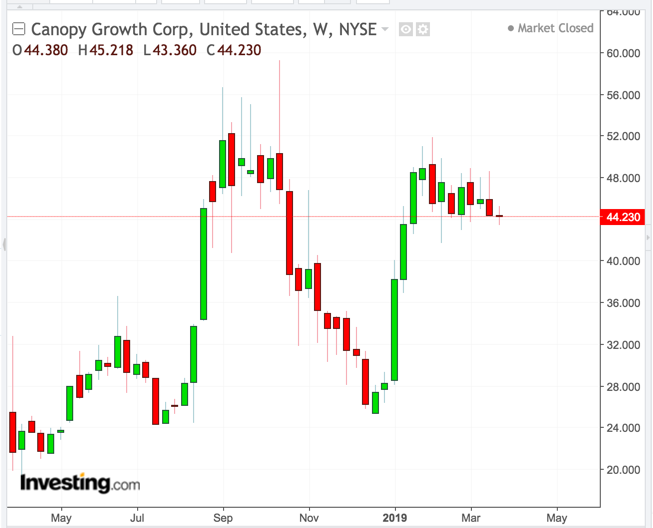 Together with new, higher-priced forms of cannabis like edibles and beverages, this should help drive margins “north of 50% in the coming quarters,” Saunders said in the call, as reported by Bloomberg. Closing at $44.23 yesterday, Canopy’s share price has surged more than 60% this year.

The story wasn’t much different for Aurora Cannabis (NYSE:ACB) which also saw its margins shrank after costs to develop new products rose and prices declined. The company reported a net loss of C$238 million, while sales jumped 362% to C$54.2 million in Q4.

Aurora, which captured about 20% of the Canadian market in the quarter, sees a great opportunity in global medical sales. “If I lose sleep over anything, I lose sleep over our ability to supply the global cannabis market,” Aurora Chief Executive Officer Terry Booth said on Aurora’s conference call as cited by Bloomberg, adding that it will be at least five years before the industry can meet demand for high-quality pot exports.

Aurora operates in 21 countries with a strong presence in the European Union. The company announced early this month that billionaire investor Nelson Peltz is joining Aurora as a strategic adviser. 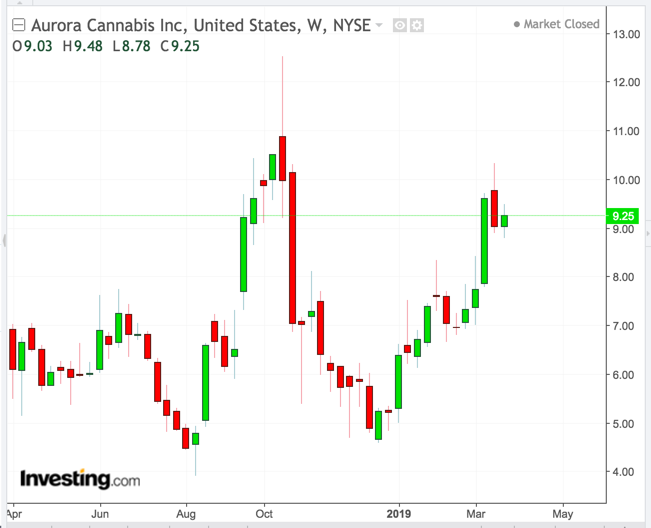 Peltz, whose New York-based Trian Fund Management LP has more than $10 billion under management, will advise Aurora on “potential partnerships with leading corporations,” the company said in a statement on March 13. Trading around $9 a share, Aurora stock is up 77% this year, mainly on hopes that the company will find a big global partner to achieve its expansion plans.

Tilray (NASDAQ:TLRY), one of the major producers whose shares surged 300% last year at one point, revealed a similar pattern when announcing Q4 earnings last week. Its quarterly sales grew to $15.5 million, up from $5.1 million in the year-ago period, beating the $14.1 million consensus estimate.

For 2019, Tilray said its revenue might at least triple from last year’s $43 million, especially after the company positioned itself to meet the growing demand for hemp-derived CBD, the non-intoxicating cousin of THC, through its recent acquisition of Manitoba Harvest. 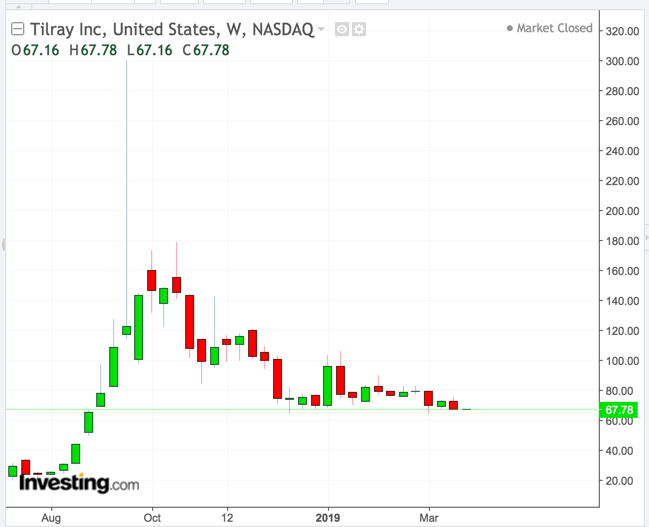 Tilray stock, trading at $67.78 at yesterday’s close, is down more than 30% since its Jan. 14 high of $106, as some investors questioned the company’s expansive valuations compared to its peers which have higher sales.

It’s evident from the earnings reports of these top producers that they’re well on track to boost their sales, but are unable to control costs in the initial stages of their explosive growth. But that’s quite normal for a company in a high-growth cycle.

That said, investing in marijuana stocks is still a highly risky bet as companies that haven’t yet shown a meaningful path to profitability become the first victims when investors cut risks. We continue to recommend that long-term investors look for better entry points if the current sell-off in the equity market accelerates.